A Rapid-Response Survey on Sociodemographic Characteristics, Needs and Resources

The UkrAiA project was a scientific survey whose goal was the collection of primary data on Ukrainian displaced persons for academic purposes and evidence-based policy making in the areas of labor market, education, housing and integration. The field phase took place from March – June 2022, while data analysis and research are still ongoing.

The study was conducted by independent academic researchers from the Vienna University of Economics and Business (WU) and the Austrian Academy of Sciences (OeAW) with support from the FH Salzburg [Team]. Partner surveys were conducted in Linz, Austria and Kracow, Poland [Cooperations]. The core team at WU and OeAW conducted similary scientific surveys among Syrian, Iraqi and Afghan refugees in Austria since 2015: DIPAS, ReHIS, WIN as well as additional smaller projects (e.g. MigCOV).
Results from these projects were published in multiple highly prestigious scientific journals – e.g. PloS One [1, 2], Health Policy, Refugee Survey Quarterly, Religions, International Migration (forthcoming) as well as in book chapters [3, 4], multiple conference presentations, working papers and reports as well as a book. They were frequently cited by the scientific community.
Furthermore, the projects and their results were widely covered by the press, in Austrian newspaper articles, columns as well as TV interviews, blogs and social media [e.g. twitter]. For these media activities, the team was awarded the Kurt-Rothschild Preis 2019 for science communication.

The field phase and preliminary analysis were financially supported by the City of Vienna (MA17) and the Vienna Social Fund (FSW).

Data collection was realized using PAPI – the vast majority of respondents chose the paper and pencil solution – and CAWI methods. Questionnaires were available in Ukrainian, Russian and English. The final sample comprises 1,094 respondents (89% female) with adults of all ages from all regions of Ukraine. 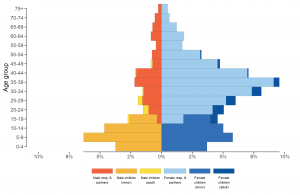 Age profile of UkrAiA respondents, their partners and children in Austria 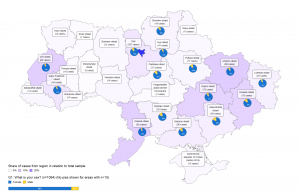 First results and insights of the UkrAiA study may be found on the presentation slides and publications [presentations].